The phenomenon of the Contempt of Court is an event that is rife in Indonesia lately. It is considered to reduce the dignity, majesty and authority of the judiciary and its apparatus. Particularly the dignity and authority of the judge. Attitudes and actions displayed by the search for justice, legal practitioners, the press, political and social organizations, NGOs, academics, judicial commission, as well as various other parties in such a way can be categorized injure the dignity, majesty and authority of the judiciary, good attitude and actions directed against the judicial process, judicial officials, as well as court decisions. Lack of strict legal instruments and adequate to serve as guidelines and benchmarks to judge such a phenomenon is made Contempt of Court always the case. View of the judge is an arm of God would have been contrary to Contempt of Court. The judge in charge of prosecuting and providing justice for justice seekers should not accept the bad treatments. This study is based on normative research method using statutory approach and conceptual approaches. Legislation that used is Law No. 4 of 1985 on the Supreme Court, Code of criminal law, the law book of the law of criminal procedure, the draft book of the Criminal Justice Act 2012 and draft the Code of Criminal Procedure 2012. This research is expected to contribute significantly for the creation benchmarks and appropriate guidelines in terms of the establishment of regulations and legislation on Contempt of Court Act 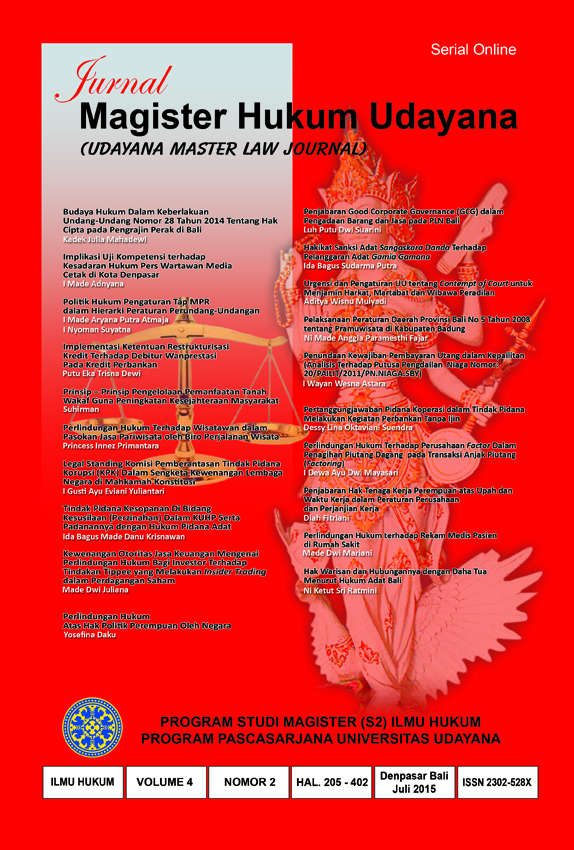 Jurnal Magister Hukum Udayana (Udayana Master Law of Journal) by Faculty of Law Udayana University is licensed under a Creative Commons Attribution-NonCommercial 4.0 International License.
Based on a work at https://ojs.unud.ac.id/index.php/jmhu/index.
Permissions beyond the scope of this license may be available at https://ojs.unud.ac.id/index.php/jmhu/index.

This journal indexed in :