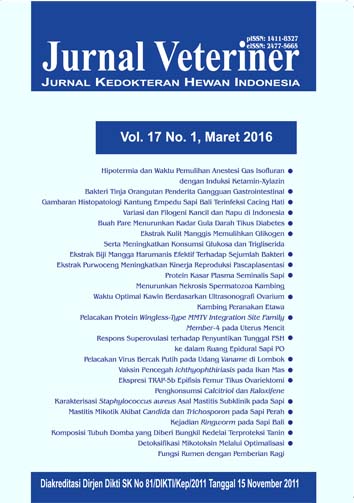 The aims of this study was to detect the expression of Wingless-type MMTV integration site familymember 4 (Wnt4) protein in the uterus of Swiss Webster mice. Laboratory animals that were used areadult Swiss Webster mice weighing 25-30 grams. Mice were kept and mated in a controlled laboratoryconditions. Pregnancy was determined by the presence of vaginal plug in female mice after breeding.Protein was isolated from the uterus at seven days of gestation. Immunoblotting was performed usingChemiluminescent Western Blot kit. The primary antibody used was anti Wnt-4 antibody with a 1: 1000dilution. The results showed protein bands with molecular weights ranging from 40 kDa showed a positivereaction to the primary antibody that were used so that it can be concluded that the protein is Wnt4protein.