Diabetes mellitus is a metabolic disease characterized by high blood sugar or hyperglycemia (>=126 mg/dl). In addition to drugs and insulin injections, regulating diet is an important control factor for this disease. Diabetics with complications will experience low intake of food due to various complaints such as nausea, vomiting, and decreased appetite. These low intake if not well handled will cause malnutrition. Small but nutrient-dense food portions are needed in the treatment of diabetics with low intake cases. Instant porridge with high fiber content made from potato flour and rice bran is expected to overcome the low intake problem in diabetic patients. The purpose of this study was to determine the combination of potato flour and bran best for instant slurry making and the best formulation could have the effect of reducing blood sugar levels in diabetes mellitus. This research was conducted in 2 stages. The first stage of the study used an experimental method with a Randomized Block Design for Proximate Test, with three (3) replications. In the phase I study there were 6 formulations of instant slurry, a combination of potato flour and bran, namely: 90:10 (P1), 85:15 (P2), 80:20 (P3), 75:25 (P4), 70:30 (P5) and 65:35 (P6), which will be selected as the best product based on the proximate test results, crude fiber content and sensory test (taste, color, aroma, texture and overall acceptance). Based on the matrix point, P1 instant slurry became the best product with the highest value which was then tested for its effect on blood sugar in experimental animals (mice) for 28 days in the phase II study. The best instant pulp products have a low carbohydrate content of 48.20%, low fat of 7.21%, high protein 31.77% and crude fiber of 8.70%. There were 4 treatment groups, namely healthy mice given standard feed (1), diabetic rats given standard feed (2), diabetic rats fed standard feed energy doses: instant porridge of 50:50 (3) and diabetic rats given 100% instant porridge (4). Based on the results of variance, giving 100% instant porridge (group 4) had a very significant effect on the decrease in the mean blood sugar of mice since the first week of intervention. For four (4) weeks of intervention, rats given 100% instant porridge had an average blood sugar drop of 25.78% and were categorized normal (>=126 mg/dl). 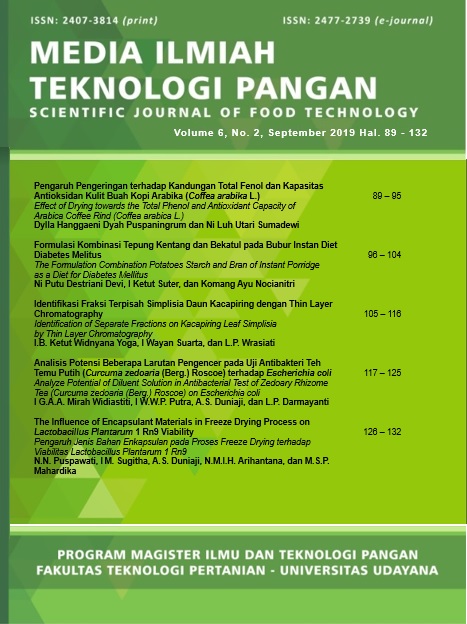