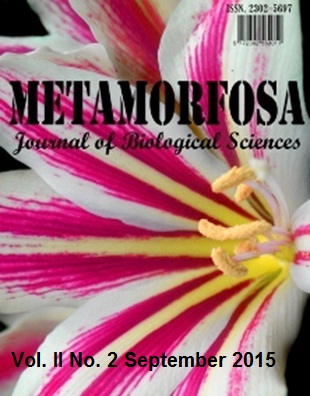 Anthropogenic-origin forest disturbance has been known to increase the risk of invasion to native habitat. Invasive species caused problems for local ecosystems and their native species. The  research on the dynamics and autecology of invasive species Cyperus rotundus was conducted on anthropogenic disturbed Pohen mountain forest in Bali, Indonesia. Results showed significant changes in microclimatic variables from forest edge to interior. C. rotundus in Pohen mountain forest can be found in a road edge and forest exterior where sunlight is abundant and decrease in a more shady sites and absent under thick forest canopies CCA ordination analysis showed that C. rotundus in Pohen mountain forest tends to co-occur together with Imperata cylindrica and Bidens biternata. To be able to control potentially troublesome exotic invasive species, firstly we have to understand what factors limit their growth and development. Therefore this study is has important value because the data which from  result in studying invasive species autecology will act as baseline data that will be useful to generate management program including rehabilitation and restoration program.