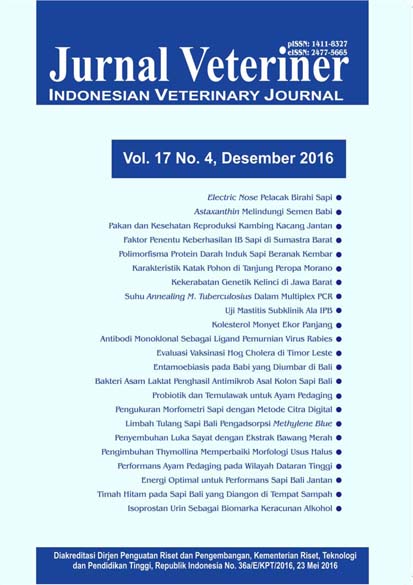 Bali cattle are known for having high adaptability to any environmental condition and have proven tosurvive in critical environments including landfills. The aim of this study was to determine the relationshipbetween Serum Glutamic Pyruvic Transaminase /Serum Glutamic Oxaloacetic Transaminase (SGPT/SGOT) levels and lead (Pb) level in blood of bali cattle reared in the landfill Denpasar. A total of 22Balicattle were used in this study was. The blood was drawn from the jugular vein and 10 ml blood werecollected using tubes containing EDTA 0.5% and 10 mL without EDTA tubes. Levels of SGPT and SGOTwere measured by using Auto analyzer (Refloton (R) plus) method, while the measurement of Pb in bloodplasma was conducted by using atomic absorption spectrophotometry (AAS) method. Result of the SGPTand SGOT measurement obtained were relatively varied with an average of SGPT = 29.96±5.67 U/L andSGOT = 78.82±17.62.U/L. Similarly, Pb measurement results vary widely between 4.004 to 10.216 withan average of 6.595±1.85 ppm. Correlation analysis showed that there was an association between SGOTwith Pb levels. However, no correlation was observed between the SGPT with Pblevels. These resultsindicate that the levels of lead may cause pathological tissue cells in organs other than liver. Its concludedthat heavy metalPb is found in the blood of bali cattle reared in Denpasar city landfill, and it may becorrelated with the level of the SGOT and may cause pathological tissue cells organs.