This research was using semantics as part of linguistics studies to analyze meaning of words in the translation of forage terminology. There were 15 (fifteen) words analyzed using componential analysis or word(s) composition. These words were taken from the animal terminology’s dictionary based on their semantic field. The lexicals relationship were observed from their taxonomy in words catagories and formed in diagram. These were described with generic-specific concept found in the source language and receptor language. The analogies of the lexical items were classified into three subcategories: legumes group marked in +legumes, not part of legumes marked in –legumes, and part of legumes group but being separated marked in ±legumes. The process of translation and words relationship done by the translator were analyzed in the source language to the receptor language. In the result of research, the translator used 80% descriptive phrases to clarified meaning of words in the forage terminology, particularly for lexical items which unable to be translated directly and only 20% were being transferred directly into the receptor language without descriptive phrase. 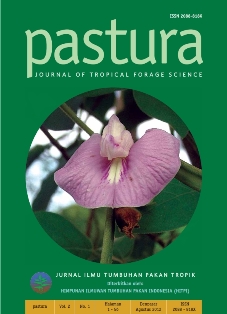