Grasses are known as part of palm plantation ecology and has benefits as source of ruminant feed. Besides, it is believed to have ability as Carbon Storage. However, to what extent the grass can be capable as Carbon Storage and what are the species that can be best fitted as Carbon Storage are still questionable especially for those that are grown on plantation. Thus, investigation was carried out to identify tropical grasses grown under palm plantation coverage that can be functioned as Carbon Storage as well as to determine its nutrition contents. Due to having many traditional plantations, Pauh District of Sarolangon Jambi was opted as observation area. From there, samples were taken randomly from plots and sub-plots that were pre-created. Grass samples are grouped into three groups; leave, stem and root, and taken to laboratory for analysis. Among those that were observed, Panicum brevifolium, Axonopus compressus, Centotheca longilamina, Centotheca longilamina ohwi and Schleria sumatrensis were shown their capability as carbon storage. However, those are carbon storage capable have slightly different in carbon and nitrogen contents, Acid Detergent Fiber (ADF) and Neutral Detergent Fiber (NDF) analysis and almost the same in fiber fractions. 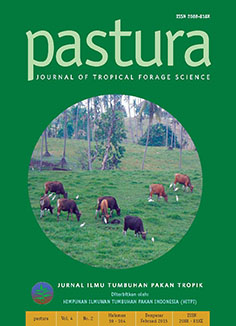