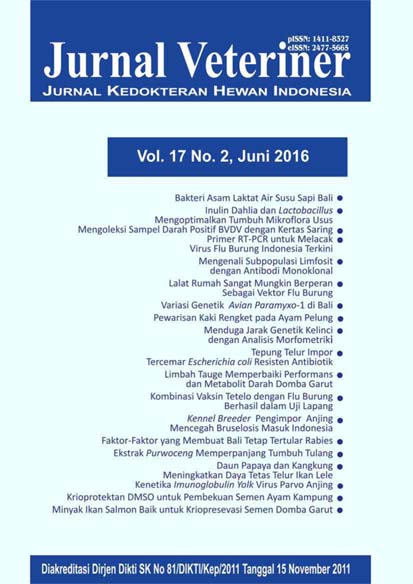 This study was conducted to determine the seroprevalence of Brucella canis of imported dog for breederthrough Soekarno Hatta International Airport, Cengkareng Tanggerang, Indonesia. A total of 64 serumsamples were obtained from breeder dogs imported to Indonesia between Mei–September 2014. Theserums were examined by Immunochromatographic Assay. None of the serum samples in this studytested positive. Result of this study indicated that antibodies of B. canis were not detected in 64 dogsimported to Indonesia during the research period. A Knowledge, Attitude and Practises (KAP) Survey wasalso performed. This study used 32 respondents and data were analyzed by using path analysis. Therespondents were breeding kennel owners (breeder) who imported dogs through Soekarno HattaInternational Airport during the research period. The study concluded that the knowledge significantlyinfluenced the attitude of the breeder, and also the attitude significantly influenced the practises ofpreventing and controlling brucellosis. The annually income was also identified as a variable thatsignificantly influenced the practises. Practice prevention and control of canine brucellosis can be improvedby increasing the knowledge of the breeding kennel owner.