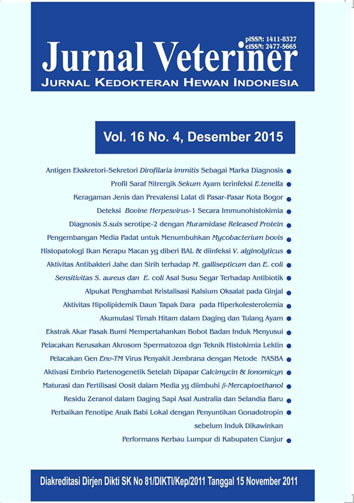 Zeranol is one of the synthetic growth hormone produced from mycotoxin that could affect humanhealth. The objective of this study was to determine zeranol residue in beef meat imported from Australiaand New Zealand using Enzyme-Linked Immunosorbent Assay (ELISA). The results showed that zeranolresidue was detected in 5 of 59 meat samples (8,5 %) of Australia and 1 of 59 meat samples (1,7 %) of NewZealand, with mean concentration of 0,644±0,157 ppb and 0.680±0.00 ppb, respectively. There were nosignificant differences in the concentration of zeranol residue between the meat from both countries(p>0,005). In addition the concentration of zeranol residue was below the National Standardization Agencyof Indonesia Maximum Residue Limit (MRL) which is 2 ppb.