UNESCO has long been known as one of the elements that support cultural heritage conservation. In 2004, UNESCO began to build and trigger the birth of a new creativity by developing concept of creative city network which is divided into several themes, such as design, music, literature, film, media art, gastronomy, crafts and folk art. In line with the concept of tourism and creative economy that is actively promoted by Indonesian Ministry of Tourism, several cities in Indonesia have been trying to join the network, one of them is Denpasar. With all the cultural potencies owned, in 2014 Denpasar governments proposed to join UNESCO creative city network as a ‘Creative City of Crafts and Folk Art’, where it can provide an opportunity for artist and crafters of Denpasar to introduce and interact with other creative city, notably in terms on how to develop local culture in globalization. This study contributes on evaluating strengths, weakness, challenges and opportunities as well as discovering efforts which should be obtained by Denpasar based on the criteria and characteristics served as a guide to join UNESCO creative cities network. 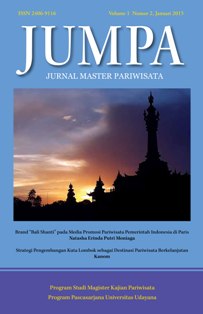