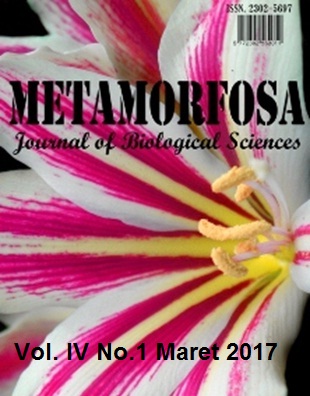 Dendrobium heterocarpum Lindl. is a native orchid in Indonesia. Its population continue to decline due to unsustainable exploitation. One solution to increase its population is via in vitro technique propagation. This research aimed to determine effect of hormone addition (Zeatin and NAA) to induce shoot multiplication of D. heterocarpum Lindl. grown in Murashige and Skoog (MS) basic medium. The research was conducted in Tissue Culture Laboratory, Department of Biology, Faculty of Mathematics and Science, Udayana University from November 2015 until March 2016. The experiment employed Completely Randomized Design (CRD) with 20 combinations of treatments, with three replicates each treatment. The treatment werer addition of Zeatin and NAA, with five concentrations of Zeatin (0, 0.1, 0,5, sweet corn and hybrids corn as the natural Zeatin); four NAA concentrations (0, 0.05, 0.1 and 0.5). Variable recorded include such as the number of shoots, roots and explant’s vigor. The quantitative data which include number of leaves and shoots after 12 weeks, were analyzed using Analysis of Variance (ANOVA); and if significantly different, tested further using Duncan Multiple Range Test (DMRT) at 5% level. Z5N3 medium revealed significantly different on amount of leaves and shoot height and also the best medium on amount of roots. Best hormone combination that can induce multiplication of new shoots are medium Z4N3 and Z5N1.