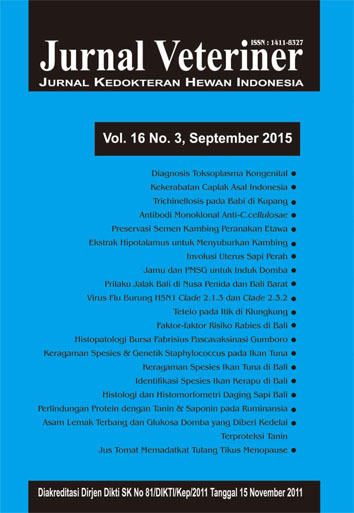 The purpose of this study is to make a monoclonal antibody against- Cysticercus cellulosae and itscharacterization. Samples antigen prepared from T. solium larvae (C. cellulosae) was then used to immunizeBalb/c. The immune response of mice assessed by ELISA test, then the lymphocytes of mice used for theproduction of monoclonal antibodies (MoAb). Origin lymphocytes of mice that produce antibodies againstC. cellulosae antigen, fused with myeloma cells (NS1). Results fusion of two cells produces hybrid cellscalled hybridomas; cells are then screened by ELISA test. Hybridoma cells that produce only MoAb, usedto produce large quantities in vitro. Characterization of MoAb against-C.cellulosae was tested by usingELISA and Western blotting. Mice were immunized with C.cellulosae antigen showed an immune responseproducing antibodies to C.cellulosae. Based on the results of fusion, produced a total of 51 hybridoma cellclones and after being screened, only three clones of hybridoma cells that produced MoAb against–C.cellulosae. MoAb produced, named after the hole where the growth of the ELISA micro plate, the BE6,BE7, and EE9. Characteristics of this MoAb capable of tracking cellulosae of fluid larvae and recognizeantigen protein bands with molecular weight 78kDa.