Southern bluefin tuna (SBT) is scientifically known Thunnus maccoyii, and just live in the southern hemisphere. SBT fish classified as the most exploited tuna fish in the southeastern part of the Indian Ocean, so it is protected by the International Union for the Conservation of Nature (IUCN). The aim of this study is too collected of SBT fish caught during January which is the peak of SBT landing in Benoa port. The study was conducted base on data sampling, observation and interviews on 33 ships were landing SBT fish during January 2016. Based on observations from 33 vessels, we found that the total of SBT fish that landed in Benoa port during January 2016 is 251 fresh fish and 366 frozen fish. However just 251 SBT fresh fish were sampled, and the result indicated the fresh SBT fish is dominated by weigh between 61-70 kg with number 61 fish with a total weight of 19.28 tonne. The SBT were caught dominated by fish that has FL (fork lenght) ranging between 151-160 cm with number 69 fish. While the smallest SBT range between 131-140 cm with the number of 5 fish. These results indicate that SBT fish caught in the Souetheast Indian Ocean during January 2016 is generaly relative small fish (130–160 cm FL) with a number of 163 fish and mature SBT fish (FL > 162 cm) with a number of 88 and young SBT (FL < 130 cm) with a number of 5 fish. Based on morphometric analysis, eyeball diameter of SBT range 6-8 cm, the length lateral head from the tip of the mouth to behind the gill cover ranging 46-54 cm, the length of body from the early dorsal or in front of the first dorsal fin ranging between 38-47 cm, the height of fish at the end of the anal or at the end ranging between 34-39 cm, the high of caudal peduncle ranging between 4-5 cm, th length of the dorsal base of the tail fish ranging between 53-63 cm, and the length of the base of tail anal from anal to tail ranging between 41-51 cm. Base on size and age composition, it is shown that the growth of SBT during January 2016 is isometric. 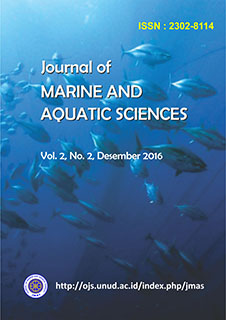