Jakarta Bay is a bay that has an important role in Jakarta, but the activity in this area lead to the potential for pollution mainly ammonium and nitrate. Pollution peaks generally occur during the rainy season (west monsoon). Pollution that enters the bay can be neutralized naturally by water as long as the amount does not exceed the asimilation capacity. This study aims to calculate the total input (load), assimilation capacity, and residence time of ammonium and nitrate in Jakarta Bay in the rainy season. Data from this study is derived from secondary data. For the total input of pollutants are calculated from the input stream, the atmosphere and the boundary. From the research found that the Jakarta Bay had a total load of pollutants NH4 at 115.8 x 109 mmol N/month and NO3 46.5 x 109 mmol N/month. The biggest contributor to the pollution comes from the boundary NH4 is 56.9% and NO3 from the river 70.1%. Load from Citarum river for NH4 around 3.8 x 1010 mmol N/month and NO3 around 3.0 x 1010 mmol N/month higher than Marunda, Priok and Angke the rivers. Assimilation capacity of Jakarta bay  for NH4 around 25.7 x 109 mmol N/month and NO3 of 24.1 x 109 mmol N/month. It shows the total load of pollutants entering the Jakarta Bay is greater than the assimilation capacity. The residence time of water in the Bay of Jakarta is 13.3 days longer than the residence time of NH4 and NO3 which were only 8.6 and 9.2 days. 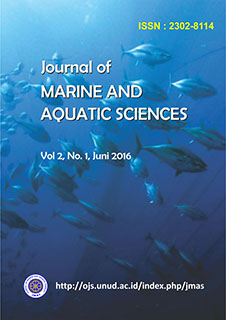