APPLICATION OF Trichoderma spp. AND LIGNOHUMATE TO SUPPRESS A PATHOGEN OF CLUBROOT (Plasmodiophora brassicae WOR.) AND PROMOTE PLANT GROWTH OF CABBAGE

The high economic value of cabbage crop leads farmers to make various efforts to suppress the pathogen of club root which is detrimental to plants. Efforts that need to be put forward must be environmentally safe. One way that is environmentally friendly is to control a pathogen biologically using antagonistic microbes. Therefore, the use of microbes such as Trichoderma which has been widely studied is important because it was able to suppress clubroot incidence and stimulate plant growth as well. Meanwhile, the need for plant nutrients to maximize plant growth requires an input of organic materials such as lignohumate which preserve soil nutrients, improve soil structure and increase plant resistance to biotic and abiotic stresses. The previous study on this scheme found an effective indigenous Trichoderma to suppress clubroot, therefore it is used in the current study. The objective of this study was to find out a combination treatment of Trichoderma and lignohumate which can suppress clubroot and increase plant growth. This experiment used a Randomized Block Design with 2 factors and 3 replications. Trichoderma concentration consisted of 3 levels, namely 0 spores (control), 1x106 spores. 2x106 spores, and 3x106 spores per plant which were suspended in 150 ml of water. The lignohumate treatments were 0.01, 0.02, 0.05, 0.1, 0.5, 1.0, and 2%. The results showed that lignohumate treatment was interact with Trichoderma population number on disease incidence, total clubroot, root dry weight, but not to canopy dry weight. The most suitable combination of treatments was the Trichoderma population of 3x106 spores (15 g) in combination to lignohumate of 0.5%.  This combination resulted in the lowest disease incidence, the lowest total clubroot, root dry weight, and the highest canopy dry weight. The higher the lignohumate concentration up to 0.5%, the higher the number of microbes (fungi and bacteria) growth, howeverit decreased above the concentration of 0.5%. 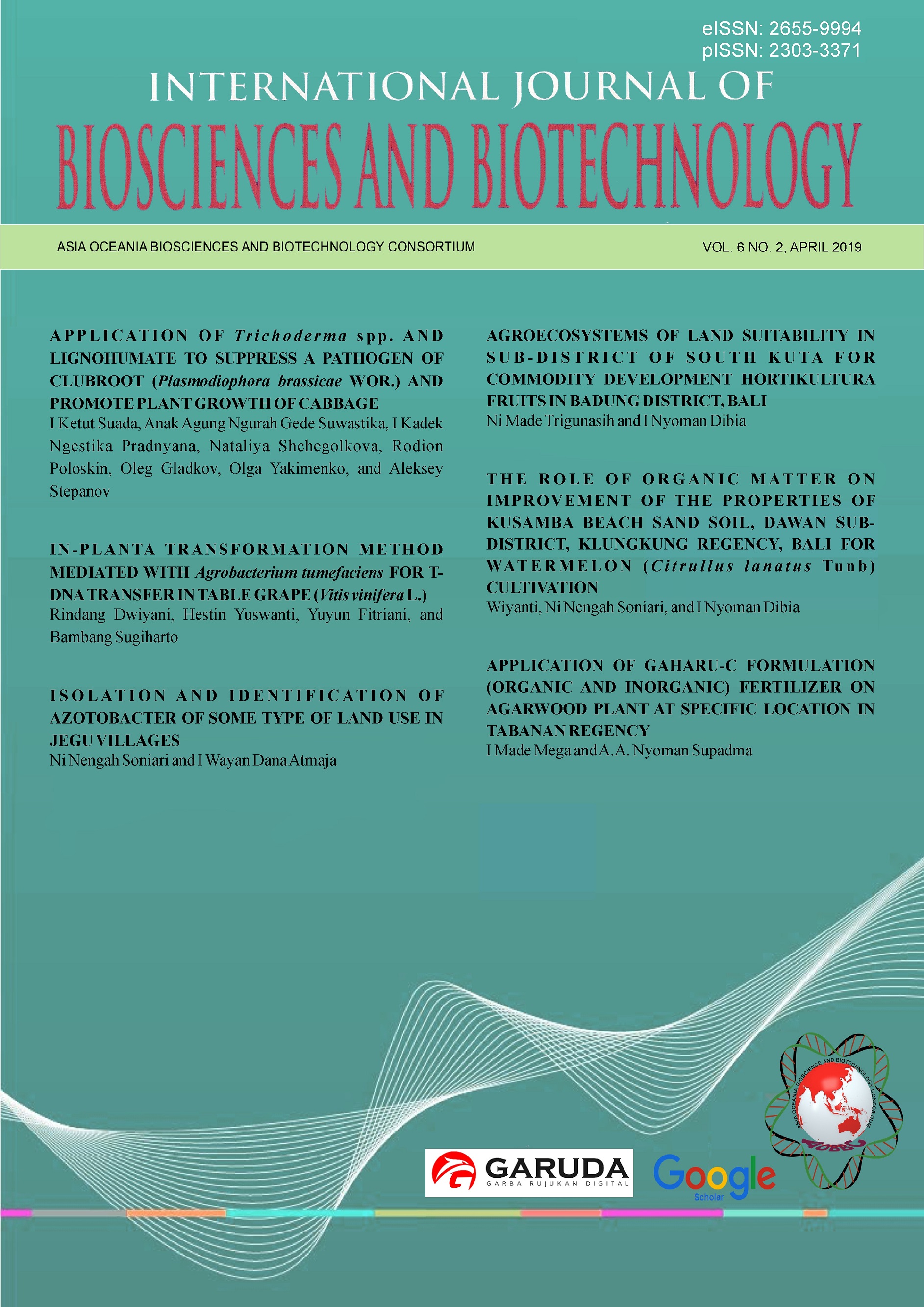 International Journal of Biosciences and Biotechnology (IJBB) Accreditation at SINTA RISTEKDIKTI (Ministry of Research, Technology, and Higher Education of the Republic of Indonesia). IJBB Sinta Rank Score in S3.

The Edition Numbering of IJBB

The edition numbering for the International Journal of Biosciences and Biotechnology (IJBB) follows the school year in Indonesia, so number 1 is in September and number 2 in April for each volume.

International Journal of Biosciences and Biotechnology