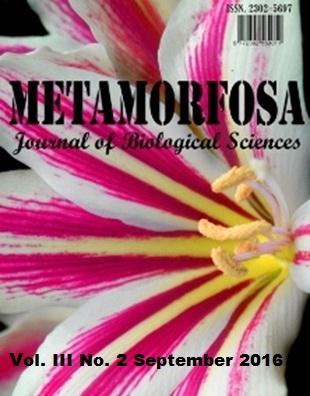 The purpose of this study was to determine the effect of habitat on the morphometric and gonadal development and to know the range of index values ??gonad maturity sea eel (Macrotema caligans). The results showed that habitat mainly the population of seagrass is related to morphometry sea eel. At five sites studied showed an average size morphometry highest in the sea eel living in Semawang Beach, which is the average size body length of 24.96 ± 0.95 cm. This study also shows morphometry females sea eel larger than males. Gonadal development of eel female is formed through the five stages. The first stage, characterized by underdeveloped oogonia,  the second stage, a massive increase gonads up to three times the original size. The third stage, lipid vacuoles are formed inside the egg with an increase in cell volume. The fourth stage, marked by the maturation of oocytes and the fifth stage, oocytes undergo atresi. Values ??range of gonad maturation index sea eel (Macrotema calligans) on the entire study was 0.16% to 9.75%.