The members of cattle farmer groups “Mekar Jaya” are small farmers who raise 2-5 heads of cattle. Marketing
system has not yet been well-organized, the role of the group is not maximized in assisting its members to market
the cattle produced. The farmers marketed their cattle individually by selling to the middleman known as “belantik”
who come to the farm location. The price paid by the belantik was determined based on estimated weight of
cattle, in which the skill of farmers in this case was not adequate. The market structure faced by farmers leads to
monopsony, market chain was too long, and farmers’ bargaining position was weak. The above conditions caused to
low farmer’s share, it was only 63.48%. This Community service aims to improve the efficiency of cattle marketing
in this group so that the farmer’s share could be increased. The methods used were a lecture, discussion, and
practice. This activity provided a positive influence on changes in mindset and behavior of members of the group
in the cattle marketing. These changes included: increasing the role of the group to support the marketing, market
chain was shorter, and upgrading the skills of farmers to estimate the cattle weight. These changes improved
marketing efficiency showed by the increase in farmer’s share of 5.55%. The increasing of farmer’s share was still
felt not maximized because there was cheating indication in weighing cattle in livestock market. 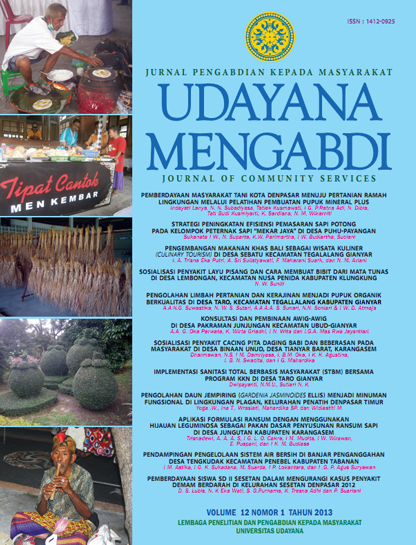