Kelurahan Kesiman is an administrative village located in the district of East Denpasar. Although the village Kesiman adjacent to the village of Sanur known for its tourism development, but the village is classified as a low level of rural welfare in the city of Denpasar. This is shown by the family’s real income and welfare families are still relatively low. The livelihoods of residents of this village mostly as laborers/employees/workers and services in part of small farmers. Given their relatively low incomes but basic needs are relatively high in urban areas so that they need to seek additional income from a sideline. Therefore, they need creative competencies other than those already owned. One of a growing business in this region is the cultivation of freshwater fish such as catfish and tilapia. Increased cultivation and consumption of catfish as a species of freshwater fish are more loved by the people in this region led to the holding of training programs cultivation and post harvest processing of freshwater fish such as efforts to increase the competence creative community to improve social welfare. Freshwater fish cultivation covering tarpaulin pond making techniques, seed selection, seeding, food selection including the selection of additional food, and crop production. Post-harvest processing of freshwater fish include catfish processing practices into some foods such as shredded catfish, catfish nuggets, meatballs catfish, and special fried catfish. The training program was named Program Desa Vokasi, attended by 25 participants and held by a foundation and supported by government through related agencies. Welcome and community support for the implementation of this program indicated a very large and enthusiastic participation by the participants in the implementation of activities. The assessment results of the product in the evaluation of the implementation of this program is considered successfully by the instructors. 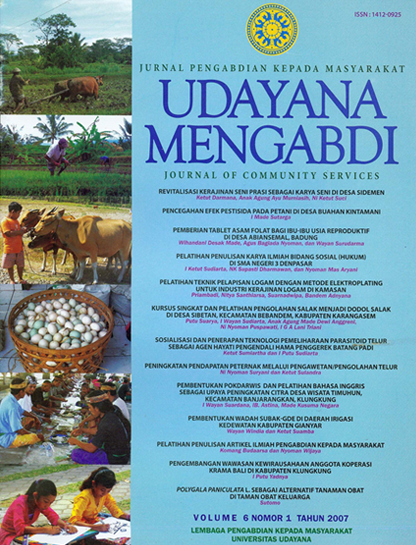