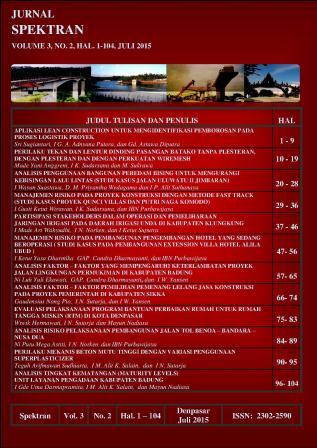 The rapid economic development such as now day, it need a construction method that may provide a facility faster and less cost. Therefore, fast track method has been widely applied in project management as happened in Qunci Villas Project at Lombok and Putri Naga Komodo Project at Loh Liang of Komodo Island. Fast track construction method has potential risks that can interfere the success of the project. This study aims to identify the risks, especially the mayor risk, to formulate the mitigation action, and to determine the risk ownership.

This study was conducted using qualitative descriptive method by identifying the risks arising during the implementation of the fast track method on Qunci Villas and Putri Naga Komodo Projects through the study of literature, brainstorming, interview using questionnaires to those who knew or were involved in the project. So the frequency and magnitude of the consequences of each risk can be known. Then the risk assessment can be conducted to determine the mayor risk and the minor risk. Then determining mitigation action for the mayor risk to reduce the negative impact that may arise. Then allocating the risk ownership in other to the mitigation action can be handled properly.