City Strunggle: Rural and Urban Cultural Space in Bali In the Modern Indonesian Poetry of the 1960s—2012

This research is based on the space discourse that represents the city and its environment in modern Indonesian literature in Bali in the 1960s—2012. City and Bali are presented as a setting of events through space that shows the city as a social configuration of its people. The research problem formulation is (1) rural and urban concepts in the appearance of tourist cities in Bali and (2) decentering Bali and Bali's changes in the poems of the 1960s—2012. The data collection of this research used the library method with note taking technique. Descriptive analytic analysis is used as a method with critical interpretive techniques. To analyze the data Derrida's deconstruction theory was used, specifically decentering the rural and urban cultural paradigm which places the text as a social construction. The results and discussion of this research show that, first, poems of Balinese poets have a tendency not to place cities as spaces as centers of progress, but cities that show individual awareness in the middle of the city. Second, decentering Bali is a hierarchical struggle that places rural and urban culture as a contradiction of urban spatial policy with the efforts of the community to defend its culture. Therefore, the poems of the 1960s—2012 about Bali was a battle of discourses that put the binary opposition to form because of the concept of rural and urban areas. 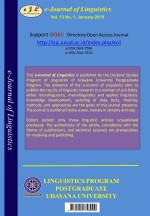